What's the strangest way you've gained a permission for the dogs? 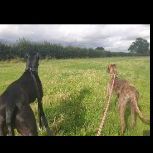