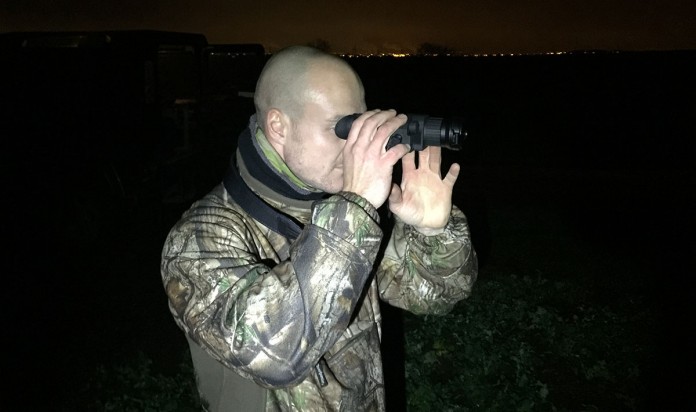 This is a review of the Pulsar Quantum XD38S and XD50S range of thermal monoculars. The Pulsar XD range now supersedes the HD thermal monocular’s of 2014/2015 and brings with it a lower price tag over the 2014 HD prices also various improvements, these being a new colour palette, stadiametric rangefinder, 50hz refresh rate, increased digital zoom and the option to turn the eye display off. The basic functions of the HD range remain the same as well as the germanium lens size in each specific model HD38/XD38 and HD50/XD50, therefore detection are ranges are exactly the same.

The XD shares the same features as the HD range, which were covered in this review of the Pulsar HD38S Monocular, but improves on the older model. The new colour palette offers 6 modes with the most popular hot white, hot cold modes and also colour highlighting which shows the hottest and coldest areas as different colours, a nice to have but white hot is still the most popular when hunting in the field. The faster refresh rate of 50hz offers smooth viewing during rapid movement of the monocular when scanning or in vehicles, the previous 30hz model worked flawlessly so the increase to 50hz is not a huge improvement, but is noticable with smoother panning.

The XD features a stadiametric range finding reticule which enables distance measuring to objects of known height, deer, boar and hare, this is not accurate to be honest but may give you a rough estimate of an animals range, although the animals position or stature could hinder its operation.

The digital zoom has now been increased to 4x over the 2x of the HD models, is this a big deal not particularly, as any digital zoom degrades the image further making it 4x will compound this and reduce field of view, but its another option to have if needing to try and identify an outline of an animal.

The biggest improvement in the XD range to my mind is the simple option of being able to turn the eye display off at the flick of a button, this option helps prevent glare from the eye display lighting you up when walking up to animals and alerting them to your presence, it prevents you having to cover the display with your hand or turn the unit on and off again.

There is also another change to the XD over HD models, it remembers the previous brightness and contrast settings if you have adjusted them manually, the previous HD model defaulted to one of the three modes settings every time it was turned on and off.

The Pulsar Quantum range of thermal monoculars really are the market leader’s in there price range from the 640×480 OLED display, 19mm, 38mm or 50mm germanium lens, 50hz refresh rate, to the feature packed compact form fibreglass body. Its the one to go for if your in the market for a thermal monocular.

How to make it even better, include a built in recording function, this function would make the unit so much easier to use when recording rather than trailing wires and extra DVR units, they fitted similar into some of there digital night vision units so it can be done, this would also be beneficial to Pulsar as a company when users can easily share footage, showcasing there products to a wider audience.

The battery unit of the Quantum range is a poor design, contacts on the AA battery holder sometimes do not provide a connection to the unit, and have to be tweaked, an option  to save hassle is to use the Pulsar EPS 3 power pack which gives an extended run time and is easy to fit to the side weaver rail, but this then prevents the use of a Pulsar lanyard. The best improvement in this department without altering the existing body design would be to supply a sealed lithium battery cartridge in the same form as the old AA battery holder and include a charger unit for it, this would be a welcome upgrade and existing users could retrofit this to there units easily.

The ultimate future upgrade would be a 640×480 microbolometer giving a huge boost in resolution and picture quality but this would also entail a large price increase for the performance increase.

If your interested in a Pulsar XD38S or Pulsar XD50S visit Blackwood Outdoors.

The One That Almost Got Away