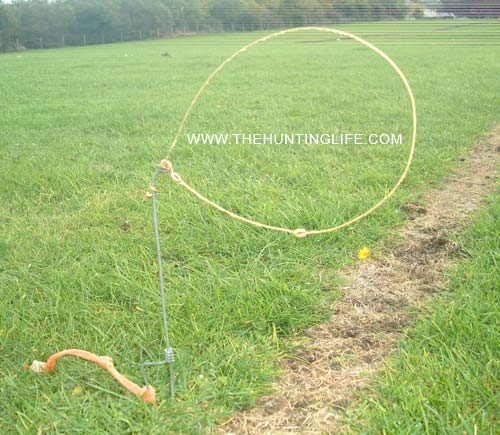 This new breakaway snare was devised by G.S Waters. It was designed to eliminate woodland deer being accidently foot snared, whilst a trapper is controlling rabbits causing damage to young trees in woodlands and plantations where deer are prone to be present, another factor that was taken into consideration was accidental snaring of domestic pets such as small house dogs and prowling cats. Therefore I had to find a breakaway that would hold all of the rabbits and release larger animals from domestic cats upwards.

Whilst discussing this system with my friend Woodga who is also a member of Hunting Life it was taken into consideration the numbers and the weights of wild rabbits which the average adult weighs three and a half pounds, some areas big winter rabbits go to six pounds in weight. I once snared 140 winter rabbits from woodland and they weighed from 4.5lbs to 5.5lbs. I have taken them at the six pound mark also. Woodga has certain locations on his ground where he has taken them on the six pound mark also. Another crucial point considered was that this type of pegged rabbit snare system with the double knot that acts as a swivel can account for up to thirty rabbits before the noose needs to be replaced. This depends on the beating and abuse that the noose has taken, such as occasional kinking and an odd broken strand, which must be replaced with a new noose should this fault occur. All these letter factors had to be considered when testing this breakaway system, therefore the breakaway system had to withstand the pulling power and shock of each and every rabbit and still and still remain strong enough to hold every rabbit caught and only release heavier non target species, from domestic cats upwards.

The first breakaway system I made was of galvanized wire 1.65 mil, it was thin but just to strong. There was also the problem of oxidisation between the galvanized wire and the ends of the brass wire loops. Next a thinner copper wire 1.35mil this copper wire was just too thin and Woodga who was doing the test phoned to say that the adult rabbits were just hitting the end of the snare and were gone, not even a mark left on the grass. The next size I used was 1.75mil copper S hook, now this was the business it held five fox cubs and one adult. These cubs were out hunting for themselves and a good size. A smaller diameter copper type wire that Woodga purchased and that worked well also, the beauty of the copper is that it dulls to a nice dark brown, blends in well with the weathered brass snares, and does not cause oxisisation to the brass snare wire, they are very compatible. The permanent fix stop added to the snare loop is only a simple brass snare eyelet spun into the snare cable this prevents full closure of the snare loop. This stop system was taught to me almost 40 years ago by one of my old mentors “Willie Mcmaster” or “Willie Mac”as he was known to everyone. The stop eyelet is attached to the snare cable 5” long from the end eyelet of the snare. The latter measurement is taken from the outside of each eyelet, the stop eyelet is just inserted between the strands of snare wire, three on either side of them spun up into a nice firm cable.

There is a point I would like you to note, when using a brass eyelet as a stop, check the type of eyelet that you have purchased as some of them have an even smooth on either side, these are fine but if your going to use the ones that have larger dished face on one side and the smaller smooth face on the other side, make sure that the SMALLER and smoother face lies in the middle of the noose as it lies more flush and level with the cable and has more flush level feel to it and more animal friendly. Always keep the larger rim of the stop eyelet to the outside of the cable, this stop system eliminates any trauma around the head of the rabbit, and allows any birds to be released, should they accidentally get caught.

The simple wire snare is a very cost effective device, used to control predator and rabbits, therefore to retain this system in the future we must loose our complacency and become more humane in our methods of control. That is why I advise the breakaway fox snare and the breakaway rabbit snaring system, we must have this vision to look ahead and safeguard our methods for the future fieldsports generations to come.

“The wire mans eyes are in his head, while the fool walketh in the darkness”

*Note
The end eyelet that runs along the snare cable should have the larger dished face to the front to give a nice smooth running action, while in the stop eyelet it should lie on the underside of the snare cable (Not in the middle of the noose) 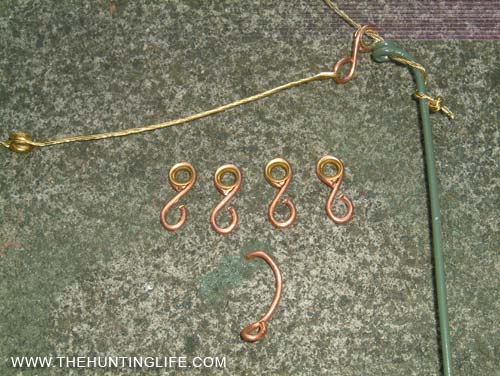 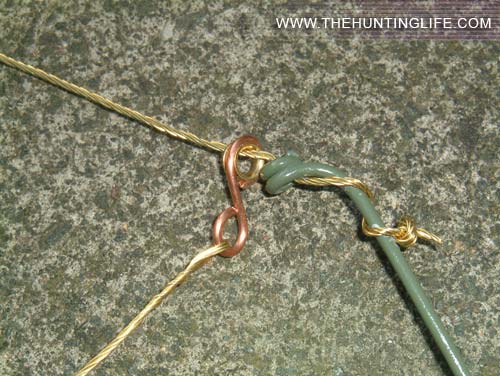 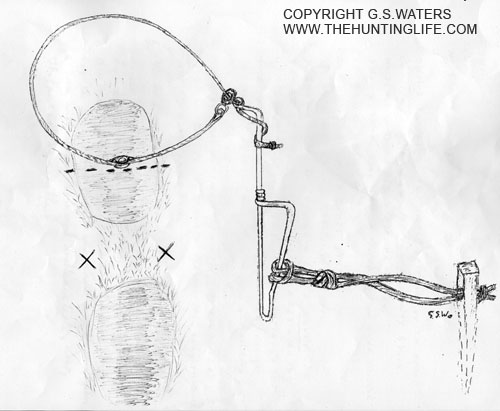 X shows space in between beats, NEVER set snares at this location. many scribes over the years have mislead many people advocating to set here, with small loops a fist height from the ground, this is utter drivel, does no one realise after all these years that this latter information is pure nonsense.

Many authors and fieldsport scribes also say to set extra snares to compensate for misses, only amateurs make statements like this.

The latest excuse I have heard of, is that some of the small loop and set low men are now setting their snares higher due to global warming, in my opinion this is to save their pride, before they will admit to setting their snares wrong over the years. I know of some who are now using the same system as I use with the big noose and double wire tealer, now that sure tells me something.. 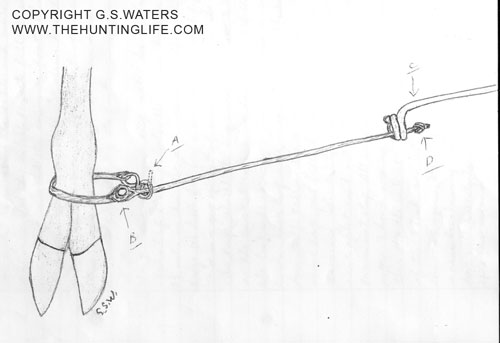 A. This illustration shows the foot of a roe deer in the new breakaway rabbit snare system and how it works the eyelet runs along the cable and meets the permanent spun in the eyelet stop which prevents full closure of the snare loop around the animals foot, eliminating any damage to the animal itself. It shows how the loop of the copper S hoop around the end eyelet opens up, due to the increased pulling pressure from a deer which has been accidentally caught by the foot.

B. The permanent fixed stop eyelet bears the pressure instead of the eyelet itself, the closed loop is approximately 1.5 inches in diameter and even testing the size loop on a large roe deer’s foot from a dressed carcase of 50 pounds. There is a gap of 3/8 of an inch between the leg and the wire loop. Should the very worst scenario take place such as the snare breaking no harm will befall the deer as the loop will never ever tighten to cause a necrosis, and the broken snare loop will eventually slide off itself. In the event of the deer itself pulling the breakaway system open, then the snare loop just falls freely to the ground therefore causing absolutely no injury whatsoever, and the end snare eyelet can’t get lost as this is prevented due to the permanent stop. All that now is required to slip another copper S hook around the eyelet and squeeze it closed. Then slip the ends of the cable loops onto the bottom eye of the S hook and close it, then retention, shape, and set the snare again. It’s only a two second job to replace a new breakaway S hook. Even the smallest woodland deer will free itself from the rabbit snare system in a matter of a few seconds.

C. Shows the double eye of the teller pin, 2.5 diameter gahvanized tinsley wire being pulled horizontally, once an animal is caught i.e rabbit as its so designed, baling twine is attached to the wire tealers double base as its strong and waterproof, the twine is attached to an ash peg which secures the whole system into the ground.

D. The double knot in the end of the six strand brass snare cable acts as a very simple and ingenius swivel system, which allows snare cable to rotate to prevent thrusting and kinking. This simple action helps take the strain of the cable by being able to spin freely in a 360 degree turn.

When snaring predator e.g fox an added S hook breaks away at the bottom eye of the hook, but I designed this copper S hook attached to a rabbit snare to pull away at the top loop around the eyelet by making the bottom loop smaller than the top loop to prevent any damage to wire loops at the end of the snare cable in the event of being pulled over the cut edge of the copper S hook, and any scarring which may occur to the brass wire end loops leading to weakening and eventual breakage. By making the bottom eye loop smaller than the bigger loop around the eyelet this increases the strength of the bottom eye loop to allow the top loop to open more readily in the event of an accidental catch of a non target species. 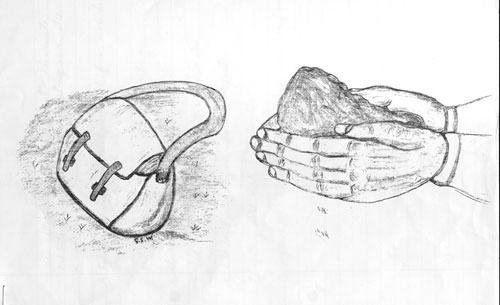 This illustration shows how to eliminate rabbit fleas from your gamebag in a few seconds.

A.Take a couple of hand fulls of nice dry soil from a mole hill or under a hedge bank, etc.

B.Put the soil into the open gamebag.

C.Close the flap over the bag.

D.Hold bag tight and give it a few firm shakes.

E.Hold bag firmly in an upside down position.

F.Ejecting soil and fleas together.

Something Had To Give