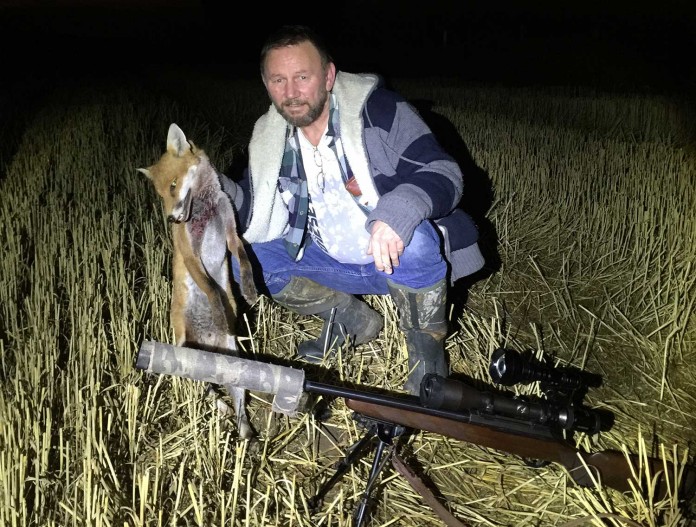 It was early September when I decided to have a look out for a few hours local on a farm with a friend Rob, the farm is only 5 minutes from the house, as we pulled through the farm we noticed a few signs of heat using the thermal spotter I have fitted to the land rover on a far hedge, we watched them for awhile, but the position was unsafe with a dual carriageway behind the next field, so we scanned around spotting a few rabbits, we had the HMR with us fitted with an Apex XD75 but we didn’t want to spook any of the horses in the adjacent fields so left them be for another night were we could utilise the .22 and do it a little more discreetly.

As we drove along the farm tracks we picked numerous hares up on the screen running around on the freshly cultivated fields, we travelled along the track and picked up a heat signature from a field a lot larger than a rabbit or hare, turns out to be two roe deer meandering along the side of a hedge until they crossed into a neighbouring farm next door, we decided to park up and wait, as we were waiting not even 5 minutes has passed when a fox came walking through a gate way right in front of us and came into view on the monitor, Rob whispered to alert me, but I wasn’t ready for a shot at the time and it quickly picked up something wasn’t quite right and headed back through the gate out of sight.

I paced the distance and went to gather him at 260 yards, he dropped with a clean chest shot

We decided to walk on foot as the fields had all been tilled,we got ourselves organised I grabbed my quad sticks, 243 fitted with an Xsearcher along with my Pulsar HD38s from off the vehicle roof, we headed through the gate scanning, no sign of life in the first field, so we walked into the next field which had been left in stubble and picked up a badger a couple of hundred yards away and a fox quite a way off against some banking, we walked as close as we could, but due to the field being quite undulating if we tried to get any further once I dropped down onto the bipod I would of lost sight, so I got into position and turned the Xsearcher on, his eyes lit up like beacons and I let an 80gr Winchester fly, it took while for the thump to get back to us, I paced the distance and went to gather him at 260 yards, he dropped with a clean chest shot, an average sized dog fox. On the way out of the farm we had another scan around, Rob had his Rapid 7 airgun with him fitted with a Photon XT and tried at a few rabbits, but the distance being hard to judge at night and not getting quite as close as we’d like, didn’t stand us in good stead.

Just near the exit of the farm we tried the Icotec caller on a rabbit squeal to see if we could pull anything in, but nothing was playing ball so we called it a night and headed home early for once, a 23:30 finish!

The One That Almost Got Away