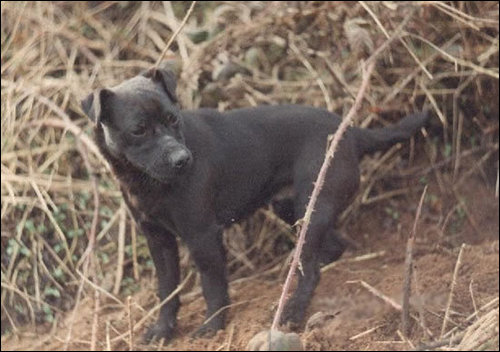 Solid, smooth and jet black is the a typical patterdale terrier. Such a dark gladiator of a dog is a joy to see, but despite what some may tell us, the patterdale can be thrown in practically any colour. From certain lines, the litter can be multi-coloured from sandy ginger to black and practically every shade in between. In the UK at the moment it appears that the patterdale Terrier is the next “In thing” , but I hope this fad peters out for such publicity and popularity will, eventually, lead to the demise of the patterdales working ability. 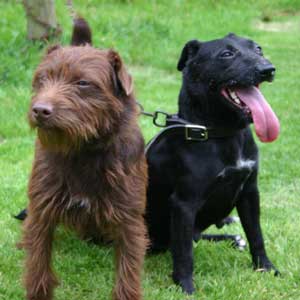 For many decades patterdale terriers have been bred from worker to worker, with the dogs not up to scratch culled. This method of improvement had given us the patterdale of today as we know it, with many excellent strains that are game. Gameness and working ability is the number one priority for the genuine terrier owner.

The trouble when a breed/type becomes popular is that the prices asked for such animals are often hugely inflated and poor specimens are passed off as genuine workers thus allowing a sub-standard dog carry its genes into the next generation. To a true working terrier bloodlines are everything. But the money men care little for such pedigrees; in fact, they don’t even understand the relevance of such history. Indeed, it is well documented that false pedigrees are banded around in order to sell pups to the highest bidder. Could you ever imagine these money men ever culling a terrier because it is a coward and a non-worker? No Way! They would probably breed off it, sell the pups for £250 a shot and then sell the adult as an “Experienced” worker. In the end, it is the breed that looses out. 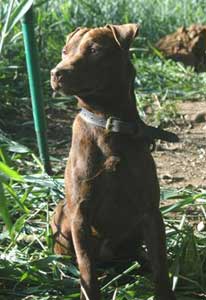 Breeding smaller and smaller to satisfy the overseas market is, again, at a detriment to the real working patterdale. A real terrier must be big enough to endure the rigours of a days hunting and working earths. It may need to use its strength to push its fox into a stop end. Some small, snipey headed terriers would be of little use to the true terrier man.

Those terrier owners that go out and dig to their dogs week in, week out often shun the shows/clubs/money side of things. They do not need a rosette to tell them what to keep in their kennel, their dogs are judged by their quarry. The value of a true patterdale cannot be realized by spanning or how it walks across a ring, but only by the amount of hours it puts in under the turf. Let us hope that the patterdale terrier’s popularity isn’t its undoing.