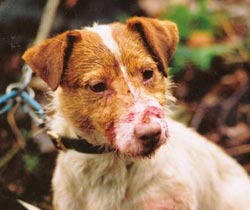 The Jack Russell Terrier must surely be one of the most popular dogs of all time. These little tykes are intelligent, active and they look at you with an almost human expression sometimes. It was a certain Reverend John “Jack” Russell that owned the most famous of these little dogs…a certain “Trump”. Although the Reverend Russell is attributed to being the “father” of this breed it is plainly obvious that this type of small, white hunting terrier existed many decades earlier. Today the Jack Russell Terrier is recognized far and wide the world over and many “strains” of this terrier exist.

I have seen a number of these Russells work and owned a few of them too. Some have been useful and some have been useless, but theres good and bad in everything I guess. In contrast to certain other types of terriers, the Jack Russell is predominantly a bayer and bolter of foxes. Yes, there are some that will be dug to time and time again , but in the whole, from what I have seen, these are in the minority. I am of course, referring to earth work in its truest sense i.e digging the fox. If we were to concern ourselves with lesser quarry then yes I am sure many more would work “harder”. But, for arguments sake, lets keep the fox as a bench mark.

And now, I will tell you a little story of a Jack Russell called Lucy. Now, this scruffy, rough-coated tan and white tyke was not a show dog, that is plain to see, in fact, she had no pedigree to speak of, but let us not concern ourselves about that. She was a Russell of the non-descript type often seen around my area. I understand that some may think she looked ugly, but back in those days she was sheer beauty in my eyes and I truly adored her.

Many years ago I rang up about a dog advertised in the local sporting press. “100% fox bitch” it read. The very next weekend I met three surely characters in the car park of a motorway service area. From out of the van they dragged a smelly, scruffy little terrier on the end of a long, blue piece of rope. She was more brown than white, her coat was so dirty and matted. The grease on her unwashed, ungroomed coat caused a “parting” all the way down her spine. It was plain to see from her frightened character that she had been abused. Well, I bought her, and you know what, that was the best money I ever spent.I took this poor dog to my grandma’s and we fed, cleaned and de-loused her, making a comfy bed for her in the empty kennel. That little dog must have thought it had won the lottery!
It did not take me long to get lucy fit and we soon bonded well. Her obedient nature and laid back attitude enabled her to be my constant companion, but would she work?  As it happens we had a stroke of luck one warm autumn afternoon whilst walking in the local woods. I inadvertently stumbled upon a fox, cat-napping in the sunshine. Instead of bolting for cover, old Charlie slowly dropped into the rock hole he was laid next to. A golden opportunity for lucy and I scrambled over the the exact hole. My dog was not interested in the slightest. I was very disappointed that she would not enter the rock hole, even thought there was a smokin’ hot scent to follow. If a terrier refuses to go to ground there is little you can do, the dog certainly cannot be “forced” . Only a week or so later I gave lucy another try. This time I had seen a brace of old cubs enter a small three hole earth on the edge of a golf course. The result was just the same. It was apparent that my purchase had not done any work before. Either that, or she had been tried and failed. I will not pretend that I wasn’t disappointed, because I was, but in such situations there was little I could do except perservere. 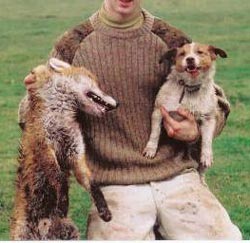 The Sunday afternoon television programmes were very poor and so I decided to go for a walk with Lucy. Outside the weather was unseasonably wet, it had been raining for two days solid and I thought I knew as to where a fox just may be laying up. In the middle of a field is a little rough gulley, and on that little rough gully is a two hole rabbit earth. Now I happened to know that a litter of cubs had been moved into that warren in late spring time, and so this is where I headed. With a net in each pocket and Lucy running free I made a cautious approach. Each entrance was well kicked out and a multitude of fresh fox prints dappled the wet earth. The earth looked very promising, but my Russell was not impressed. I eventually persuaded her to enter the dark apature, and she gave tongue a little before coming out again.
“Good girl” I told her and she repeated this time and time again, staying and baying a little longer on each occasion. Then , after some twenty minutes of this a fox hit the net, entangling immediately in its nylon meshes. OK, so this fox was a “this years” , but I was not bothered and after un-netting the vulpine I dropped it and let Lucy chase this fox away in the cover. And from that moment on, Lucy was a different dog.
I was still learning much at the time, and Lucy proved to be an ideal tool for finding a lot of foxes. I rarely had a lead on her and she ran the cover as we walked. On several occasions, I have heard her baying and when finally waded into the dense thicket found she was to ground and working a fox. Because she was not a stayer, and would only do ten minutes to ground she was an ideal foxing bitch. I would quickly net up and then call her out. As soon as she was in the open I would clip her lead to a tree and wait a minute. In many cases the fox would bolt. I used this to my advantage in the numerous places that others would not work their dogs. Deep, bad places were worked and we only ever came unstuck once. I did dig to her a few times each season , but these were in shallow places, but each dig counts I suppose. The only time that Lucy behaved different was when she was in a drain. In these structures she would push into the most stubborn fox, either persuading it to bolt or taking hold. We dug to her in a number of drains and she was a different dog in them.

I have so many good memories of that little Russell Lucy and together over the years we bolted and dug 127 foxes. No record numbers , but enjoyable all the same. We took three foxes in a day on numerous occasions with her and three from the same earth twice. I can remember on one occasion when we ended the day with a tally of six foxes, we used Lucy in the first two places taking three foxes. The first of the day was a tiny vixen out of a horrendously bad rock hole. This pile had only one entrance that the terrier had to drop down vertically to enter, but underneath the surface the place must have been huge for we never did get a reading on the box. Never-the-less she bolted a tiny cat-like vixen after half an hour. From there we went onto a long broken stone culvert and dropped lucy in. She bolted a brace, the first being netted and the second ran to ground in the next culvert along. After dealing with the netted fox we entered her into the culvert and had a shallow, but enjoyable dig to her hard hold of a fox.

In the end, my girl succumbed to the ticking of time and the sheer amount of hard work she had performed for me as her back gave way. I doubt I will ever get another dog like my Lucy.  I know that some may be reading this and thinking that she was no good because she was not a stayer in the literal sense of the word, but to someone starting out in this terrier game she was a godsend. This little passage has been wrote in honesty and I will not lie and pretend she was a world-beater, because she wasn’t, but for me she was the ultimate urban foxing bitch. And, as the programme says “I love Lucy”.