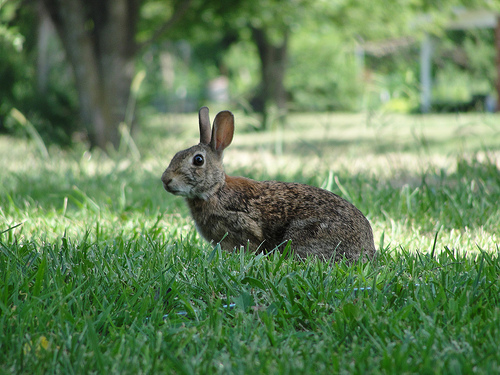 Don’t rabbits have a lot to answer for? I would say that the vast majority of us hunters started off pursuing the humble rabbit. They are purpose made for getting the young ones into our sport; easy enough to catch and yet exciting and unpredictable.

I started out at the very bottom when I come to think of it. As school kids we just mooched around the best we could and expended a lot of effort just to catch one bunny…but by god did we appreciate it! I can remember that just catching a single rabbit was seen as a productive day and the thought of actually catching two was beyond our naive comprehension. To be perfectly honest, we really did struggle to catch anything when we were young. Thankfully, time has given us experience and things have improved a little since those dim and distant days, and permission has increased dramatically too.

We have taken some good hauls of rabbits with the ferrets over the years. Obviously some seasons are better than others, but on the whole I would say the rabbit population is holding its own despite whatever method we use against it. Two of us, several years ago managed over sixty rabbits in an afternoon, but these big numbers mean little really, for it is the enjoyment of being out there that does it for me. No matter how long you have ferreted for you never stop being surprised at what you see. Stoats bolting form the ferrets, those weird coloured rabbits that you see every week and yet disappear, until the following week that it, and that little single entrance rabbit tube that is actually a rather stiff 3 foot dig that you can well do without.

One of the best memories I have was from a cold, frosty mornings ferreting several years ago now. We were ferreting thick woodland on a shoot, successfully I might add, having caught half a dozen in the first hour. The next set of holes was situated under a huge, old tree stump that had been dead longer than I have been alive. Because this small four holer was on the edge of the wood, right next to arable fields, I had a good feeling. I used to have a great little ferret, never seen one better and I don’t think I ever will. It was almost as if she knew what to do and she was very tame. If there was a little niggle I had with her, it was that she would kill rabbits too quickly, but that’s how it is sometimes isn’t it? After throwing a few nylons on I unclipped the ferret box, my little Jill was sat peering up at me, waiting to be picked up and I placed her in the entrance that looked the most run. The ferret gave a little shake, and with a tail like a toilet brush, disappeared out of sight intent on finding a bunny.

No rabbits bolted, and after a quick cup of tea from the flask we had a try with the locator box. As expected It didn’t take long to get a bleep, and I soon whittled the signal down to a three foot mark. My little ferret was stationary and I had a good guess that the rabbit was “arse on” otherwise it would have long since been killed such was the ferocity of this little Jill. My little rabbiting spade was, at that time, totally inadequate really. I have never understood why a “Rabbiting” spade should be smaller and considerably less sturdy than the usual digging tackle preferred by those that dig to their terriers? Well, the ferret wasn’t moving and so we had no other option but to have a crack at digging it. Three foot, I know, that’s nothing. If it were a fox it would have been called an “easy dig” but not today it wasn’t. I bounced the shovel into the ground and the ground bounced back with a bone-jolting shudder. I would have liked to say that it got easier, but it didn’t. This was my longest ever dig to a rabbit, and I have dug to plenty. Chip,chip,chip, was the only way I could make progress, and eventually we got there in the end. I thanked god when I felt the hard, stony ground “give” as the tube went through.

I don’t mind telling you I felt a little proud of my ferret, she had stuck to her guns, though I’m sure at least once during the dig I had prayed she would come away! The little worker wore boxing gloves of rabbit fur; I pulled this off and put her back in the wooden carrying box. When I was a wee nipper I didn’t have a ferret box, and had no money to buy one either so I used to use a cloth money bag, washer sewn in so the ferret could breathe. But, as I got older, and actually gained some permission, I started to use boxes, and found they were much better than those silly money bags. With the ferret safely out of the way I probed my hand in and, after a tussle, pulled out a plump winter rabbit, despatching it as I did. Again I had a feel into the tight soil hole and, luckily, felt another furry butt. This happened another three times making the total in that stop to five. I know it’s not a world beating number like those I have read about in the past, but those silly figures often wrote about, taking rabbits in their teens from the stop are, in my opinion, mostly lies. Five is the most I have had, and I don’t think I will ever beat that number. That dig was a tough one, not deep, but really hard work. I know it may sound silly, but I felt like I had achieved something.

Today I am lucky to have permission in many different counties around England; times have changed, thankfully, for the better. When I was young I found it hard to comprehend what it must be like to have permission, and now I know. But, I will tell you something, I will never enjoy myself as much these days as what I did when I was a thirteen year old lad, sneaking about forbidden woodlands with my faithful lurcher at heel. We would ferret little places here and there as we walked and the ferrets I owned then never seemed to stop for long either, which was a distinct advantage really. Each Sunday morning I would walk 10-15 miles, rooting about, looking for decent rabbit holes, hoping my lurcher would mark one in for me. I still remember those days and I am glad I experienced them for I really struggled to catch things. I think that because I found hunting difficult back then, it has made me appreciate things now. In those innocent days, when I was an out and out rabbiter, I can look back and say it was all pure enjoyment and I thank god for the humble rabbit.

Look After Your Earths