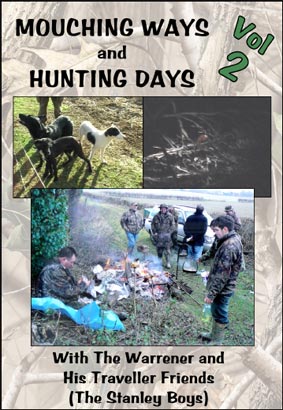 With The Warrener & His Travellers Friends (The Stanley Boys)

See The Warrener on the road again with his traveller friends mouching, hunting and poaching with their catapults, ferrets, dogs and snares

The DVD consists of various elements of the above fieldsports mentioned above, typical warrener style.

The video camera footage is at best average, the hay bait area while snaring in adverse weather will be of interest to some trappers/snarers but many of the other subjects are spoilt by what comes across as amateurism… dogs hitting longnets and running amok, lamping scenes badly filmed showing 3/4 of the screen in complete black out, numerous footage of hitting rabbits, pheasants with catapults… Its basically just more of the warreners usual…