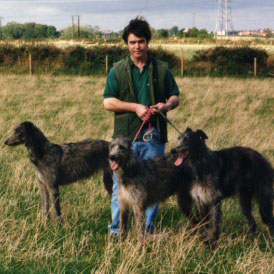 Anyone could be forgiven in thinking Scottish deerhounds are “big softies”. On the outer surface they are gentle, dignified, never suspicious and rarely aggressive. These traits however can mask an inborn desire to chase, with any fierceness the dog does possess being vented towards their prey. Nowhere will this be expressed more than when in pursuit of one particular quarry species, the fox.

There maybe those who will disagree with this premise, people for example who possess show orientated hounds, somewhat ruined for work through kennels striving for exaggerated show points. These pets will never know what it is to enjoy the excitement of running a rabbit on the lamp, to be seduced by the sweet scent left by a quick-footed hare or feel the ivory like spikes in its flesh as he grapples with an angry fox.

Here at Doxhope deerhounds we pride ourselves in owning, and producing sound working stock. All the deerhounds we have bred and kept have hunted for their keep, and it is from experience that I can highlight such an apparent inborn hatred towards Mr. Fox, by an otherwise liberal and laid back breed of dog.

My initial training of a fox killing deerhound is nothing out of the ordinary, and follows the same lines as the training of my lurchers. All pups are acquainted with, and encouraged to ‘worry’ a fox carcass or pelt early on, if two pups can play a game of tug-o-war with their new, musky smelling toy, all the better. This is not schooling the dog into anything that is alien to him; it is just bringing out something that, because of a tender age, is for the moment lying dormant.

Being a taxidermist has also, to a degree, acted as a foil to my training regime. I often have spare open-mouthed fox masks to tease and taunt my dogs with. First impressions will witness young deerhounds treating this bared-teethed item with distrust, then a grumble, a growl and finally a bite. Older dogs will literally snatch a fox mask out of my hands, and would rip it to pieces if allowed. Also, when stripping the flesh off a boiled fox head the meat is fed to my lurchers and deerhounds. Many say dogs will not eat the flesh of a fox, mine do!

As the pup gets older and the time arises when I assess it to be ready for work, I again mimic my lurchers entering, with the humble rabbit giving the youngster its first taste of hunting success. Fox killing is far from being a puppy game, but over the years I have found our type of deerhound to be easier to start off on fox than some of the crossbreds I have produced, some accounting for their first fox long before their first hare.

Many of the ‘b*****d relations’ I have reared go through the natural hunting progression of rabbit, to hare, to fox relatively unscathed, while other individuals will never make a fox killer. All the young deerhounds I have entered to fox have come out victor ludorum.

When fully grown and set a single Scottish deerhound is more than an adversary for any fox. The dog is heavier and stronger, being originally bred to pull down red deer, and I have witnessed many contests betwixt dog and fox being over in a very short period of time. One of our female homebred bitches would hit these fleeing cadavers so powerfully they were almost dispatched by her back-breaking strike. A good working deerhound akin to this bitch runs with all the determination and zest of its greyhound cousin, even if they are never as fast, but this speed will still be sufficient to out pace that of a fox.

Because of the physical dimensions, and the fact that it possesses an abundance of stamina, I have witnessed deerhounds killing more than a single fox on a nights work on the lamp on many occasions. On a similar evenings sport my accompanying deerhound would retrieve caught rabbits, alive and relatively undamaged in the grip of its powerful jaws. There seems to be something about a fox that brings out the beast in a deerhound.

Although I have highlighted the deerhounds natural aversion towards fox, and some of my experiences capitalizing on this fact, I am not suggesting for one minute hunters should rush out an obtain a pure bred, or a deerhound cross. There are so many other issues that come into the equation. One of the most important factors being to obtain an individual from a kennel or strain that specializes in working deerhounds, ‘there is a big difference’. Just because the owner once visited a hare coursing event, doesn’t make his or her stock working deerhounds.

The Scottish deerhound has so many virtues it would be impossible to list and explain them all within the scope of an article. They have numerous hunting qualities, of which the taking out of foxes single handedly is just one of them, and they are certainly not, “big softies”.