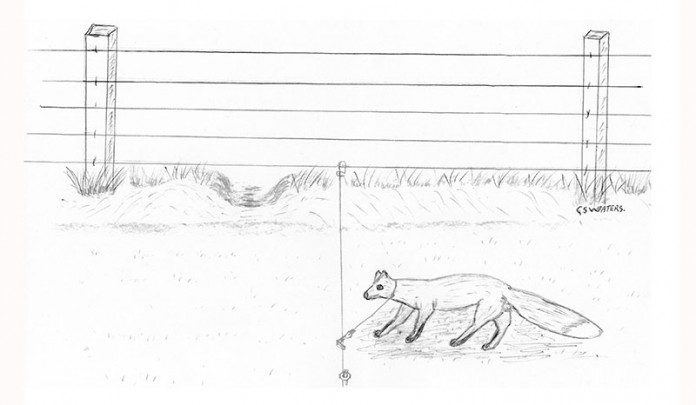 Under the snares (Scotland) order 2010 coming into force on the 11th March 2010, snares must be free running with stops fitted preventing full closure of the loop making them a restraining device.
Snares must be staked to the ground or a permanent fixture such as a tree or heavy log which cannot be moved, in a manner which prevents the snare being dragged by an animal caught in it.
It is also an offence to set a snare in a place where an animal caught in the snare is likely to become fully or partially suspended or drown.

Having an idea of what was coming in the new legislation, I came up with an idea in 2009 to convert the slide wire system that I have used (in Canada when out trapping beaver with my mate who is a pro-trapper out there). This simple system will allow keepers and trappers to still be able to snare fence lines for foxes keeping the target animal free from entanglement or becoming part or fully suspended, which can happen at times in normal snaring. Therefore this simple slide wire staked at a right angle to the fence line using a short 28 inch snare loop with a snap link attached to a small ‘L’ lock allows the animal to pull the lock freely down the wire away from the fence line but preventing its return as the one way ‘L’ lock system kinks tightly to the slide wire and won’t go back, therefore keeping the target animal in the short holding snare free from any entanglement on the fence line. 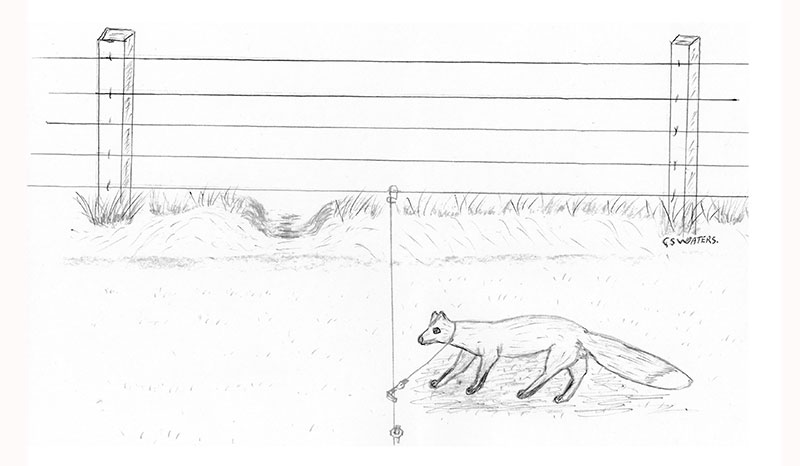 This simple slide lock system would be ideal for Scottish Gamekeepers who use bait stations (middens) enclosed with a fence, as the animal is guaranteed to come one way only – from the outside in towards the bait – or where foxes are coming into lambing fields from dense forestry or woodland.

I have also devised a simple two way system which allows the target animal to come from any side of a fence line to get caught and is also held and prevented from returning back to the fence line.
These two systems have already been tested by C. Woodhall and have worked well. In future testing photographs will be taken before humane despatch with a rifle. Using a short 28 inch snare with fitted stop and breakaway eye, ten inches of snare cable is around the fox’s neck therefore a 3.5 foot or 42 inch slide wire is long enough.
This one way slide lock system is also good for snaring foxes on open trails in grass where many foxes can be taken in a season and you don’t want the trail destroyed or flattened, using a longer slide wire with a 5 foot trail snare will keep the animal away from the run and you can keep using the same location.
This system can also be used when attached to heavy logs placed at right angles to any trail in woodland.

Also snares are not indiscriminate any more as I have devised the most humane fox and rabbit snares in the UK today with larger stop loops and breakaway systems, shock springs and roller springs to allow non target animals to free themselves more easily.

When open trail snaring for foxes set the noose at 10 inches under normal ground conditions and in higher grass or vegetation set at 12 inches high to the bottom of the loop. This is pure common sense as you will avoid the accidental snaring of 99% of badgers saving yourself a lot of grief.

There are still far too many people setting rabbit and fox snares with small loops too low to the ground, this is why they get many tripped and knocked snares when rabbit snaring, low set fox snares catch too many non target species, small loops cause avoidance and tripped snares – you want an animal looking through a snare loop not at it.