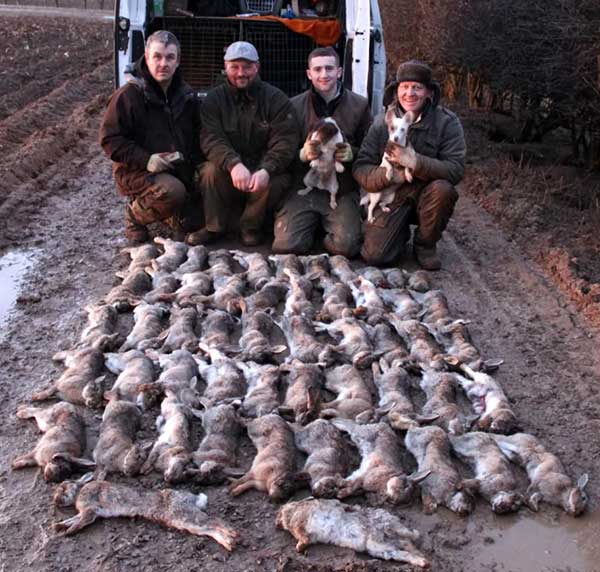 I had a word with the keeper yesterday and he asked if we would ferret a hedgerow half a mile down the road from me, it was along side the main road so the dogs would be limited.

We got there and after fitting the collars and having a chin wag we took a quick look to see what was the problem. There were a few smallish sets that had between 5 and 15 holes but quite spaced out, these are the ones I like as they tend to hold well. It seems that the larger ones 30 plus holes hold a good number but in comparison the smaller ones produce much better. We let the dogs off for a quick look but it was apparent that the road could be a big issue, one car almost crashed off the road watching us, he went well on to the verge and had to stop to check for damage, shouldn't be so nosey.

We started off really well, they all seemed to be holding and it wasn't long before we started building up the numbers. As always we have our snap and a cuppa late morning to bulid up the steam again Stevo having his rabbit sarni's, he can't get enough of it.

Back to it and we did have a few digs, we dont hang about, if they don't bolt sharpish the spades come out. I know not everyone agrees with this philosiphy but it works for us and usually works well. Half way through the day Ray dropped out the rabbit guts, not a good sight for passing old dears in their cars,we had a few disgruntled faces looking at us. We dont usually leave it this long to clean the rabbits but we were quite busy and its still quite cold which helps.

Think he was on a go-slow today

Steve the keeper dropped in to see how we were going and to mention about some more areas that need doing, that keeps us busy and we are not complaining.

We got to the end of this hedgerow and then moved to a smaller one the other side of the field, this was right at the side of a hardcore farm track so we had our stealth heads on and whispering was on the cards. It's necessary so that we don't stop the rabbits from bolting, we don't want to be digging that track trust me. We got to the second set and another dig, it was an oxo, sorry my name for small rabbits (oxo's only good for making gravy)

Well we had just been on about them with the keeper, he had asked if we had seen any yet and we said no, spoke too soon unfortunately, never the less it had to be done. The digs we did get on here were much deeper that the other side, they were older sets been there for donkeys years I guess. We did pretty much ok though until it got to the last one, 32 holes and a bit of a pain too, at this point we were flagging a bit which made things worse. We nailed about 4 and recovered most of the ferrets but 2 were located with kills, 4 and a half foot under tree roots, ouch! We started digging and the ferrets were dragging the rabbits away from the digs which really pissed us off, this was to be the last set and these 2 digs took a total of an hour and 30 minutes, what a bummer!

We eventually got them out and decided to call it a day and leave the rest for Sunday, we love it as you can guess, got to make the most of it as the time is ticking bye.

We put our gear away and removed the collars watered the ferrets and dogs and gave the dogs a rabbit as a treat, we are spoiling them I hear some say. Well the camera came out and the final count was 53, 52 on the pic one in the dogs cage, so another good days ferreting.

Adammubu off here was going to have a day with us, he is a young guy that wants some experience but he was gutted as he had a maths exam today, we will take him on on other session though so don't worry mate